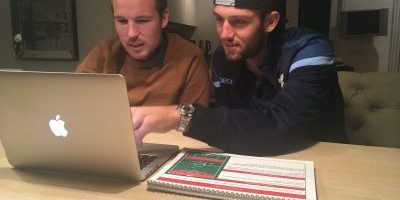 To test this, we looked at the personal statistics of Stefan de Vrij, this season and last season. He started working with us at the beginning of this season. Also, the coaching staff stayed the same between these two seasons, so probably not much has changed in the way of tactical principles at the team level. However, they did play a 4-3-3 most of the time last season, while this season Lazio is playing with a back three.

So, how have his stats developed?

Stefan plays about the same amount of passes this season as he did last season. However, he has seen a big increase in pass completion: he completes 94% of his passes! That makes him the second-most successful passer of the Serie A, just behind Juventus-midfielder Blaise Matuidi. Defensively, De Vrij makes more interceptions per game, blocks more shots, has slightly more clearances, and has a higher aerial duel success percentage. Especially the fact that Stefan de Vrij makes more interceptions this season could be an indicator of his better positioning.

He also tackles a lot less. A famous quote by Paolo Maldini goes: “If I have to make a tackle then I have already made a mistake.” What the legendary Italian defender means is that tackles are a last resort. If your positioning is correct, you don’t have to make tackles. You will make an interception, or the ball simply won’t be played to your opponent. That might also be the reason opponents aren’t able to dribble past him as much this season.

Even though defensive statistics are not as objective as attacking statistics (see for example https://statsbomb.com/2013/10/defensive-metrics-an-introduction/), we feel that the changes in De Vrij’s individual statistics can (at least partly) be contributed to a better tactical awareness. Being aware of the situations around you is necessary to be able to constantly position yourself correctly. And when your positioning is good, you will automatically rack up the interceptions and blocks, and decrease the amount of tackles you need. Even the very high pass completion can be a sign of good positioning. If you position yourself such that you have enough time to find a teammate that is open, you give yourself an advantage.

Of course, tactics can’t fully be captured in statistics, seeing as they only capture the on-the-ball actions, which is only about 2% of total playing time for individual players. Once tracking data is public, we could make bigger claims regarding tactics using data. But until then, we can still extract useful stuff from the statistics we do have. With a pretty high degree of confidence we can say that Stefan’s game has developed positively due to his improved tactical awareness and understanding. Keep it up, Stefan!