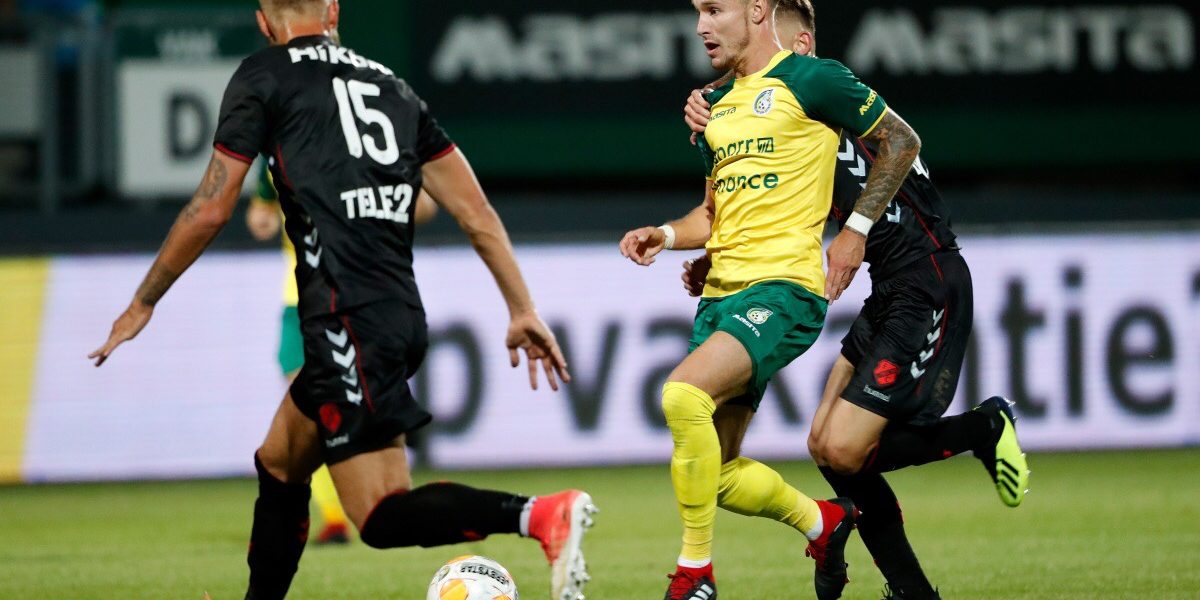 Mark Diemers was one of Fortuna Sittard’s  standout performers this season, and he is now the subject of lots of transfer speculation. But what was precisely his role in the squad of Fortuna Sittard? And in which circumstances does he perform best? Mark Diemers gave us some insight into the way he likes to play.

Mark, you played on several positions during this season (2019/20) at Fortuna Sittard. What were your most important tasks?

“I have just a few fixed tasks for every game because the manager knows that I am a creative player. He gives me the opportunity to use my creativity by not giving me too many tasks. Especially when we attack this is the case. On the ball, our coach expects the attacking line, including the number 10 position, to trust in our qualities and be free to search for a solution. The most important rule on the ball is that every position is covered, no matter who it is. On the other hand, when we don’t have possession it is necessary to have clear tasks, for every player. Especially when putting pressure on our opponent. It needs to be very clear at what moment we want to press. What these exact tasks are depends on the qualities of our next opponent. That is why analyzing them is really important”

“I have played as a striker for a while, and in those games I can drop back as a midfielder to get the ball. Or I just start as a number 10. I notice that on some occasions opponents just follow me all game long when I am playing as an attacking midfielder. Many opponents just put the number 6 on me to mark me and make it difficult for me to get to the ball. So I prefer to play as a striker so that I have a slightly more free role and that I can decide when I run into spaces. In this position, you are more likely to not have a direct opponent and that is what I like. When I play on the number 10 position, this is harder. But then it is important to create rules with your striker to swap positions in certain situations.”

And how do you train on these changes of position with your teammates?

“You can do that, for example, in a build-up form in which you have to play with three against two. The three with the ball try to get past the two opponents. Finding the free man here helps to work on changing positions. Communication with other players is crucial to make this work. That is why I want to know the preferences of people close to me on the pitch. Especially the communication between me and the striker is an important factor.  You could also train to change positions in a training game with certain people who make runs into the open spaces. Simultaneously, this creates space for other players. Recognizing these situations help you to perform this during a real game.”

“When I worked with Tactalyse, their way of looking at football made it possible to complement my skills in these kinds of situations. For example, with the exercise described above players have to run into spaces. Tactalyse made me more aware of the reasons to run into space. On which moments is it most effective to run into certain spaces? And on which parts on the field do you make these kinds of runs? If you really dive into their fundamentals, you can get a lot out of it. I notice that it has helped me a lot.”

Which aspect of the game has become more important to you over the years?

“Definitely the observance of your environment while standing on the pitch. Looking over your shoulder when you receive the ball is so essential in this game. It can buy you so much more time when you need to control the ball. This time helps me to be more creative when we are in possession. Continuously training this behavior is just very important. I always try to improve this by watching moments in games on video, but also during moments in training. When you recognize how you can work on this behavior, it can improve your game a lot. At this point of my career, I am increasingly starting to see how I can help my other teammates with this. Especially when young players train with us, I try to help them when I see that he can improve his performance by just performing one or two head-checks before receiving the ball. I think that this also can be actively trained in the youth academy of clubs. I think you should not bother the very young youth players with this, but by the time they become 16/17/18 years old, they can benefit greatly from video analysis.”