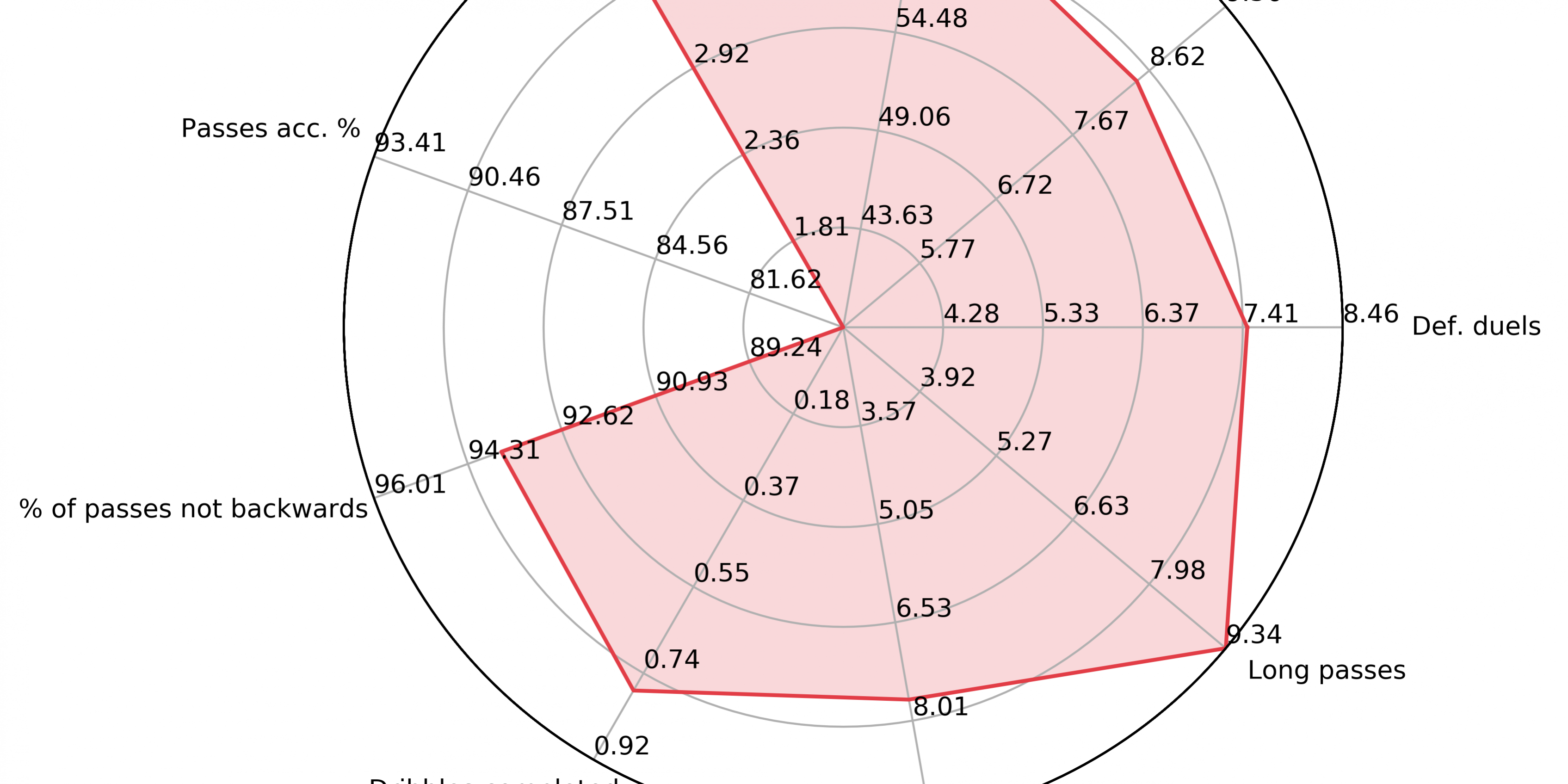 Hi everyone! It’s been a while since our last blog, but we have been very busy developing and improving our services. One of our new services is Data Science. You may have seen some statistics being displayed on our Twitter account (for example, see this tweet), and our main focus has been visualizing the progression of our players using objective statistics. Recently, we have been focusing on comparing players with their peers, using radar charts.

You might know radar charts from websites like StatsBomb or even from video games as FIFA. It’s a relatively simple tool that allows you to see a lot of information about a player at once. StatsBomb, and Ted Knutson in particular, have been using and tweaking their radars for years, so for more technical information, check out this article. We used those radars as inspiration and tried to build further on that, using our own tactical methodology.

For now, we identify 5 positions that have distinctly different in-game demands: Center Backs, Full Backs, Midfielders, Attacking Midfielders/Wingers, and Strikers. For each of these positions there are different things that you expect from them in terms of output, so you’ll need different statistics to judge them on. Some stats will be different, but with other stats we feel that they say something meaningful for every playing position, so a few stats you will see on each of our radars. For every position, the nine most relevant stats are displayed on the radar.

Before we dive in, let’s discuss some of the basics.

Yeah, Yeah, I Just Want To See Some Radars

Well, you’re in luck. We’ll show one interesting radar for each of the playing positions, from the Eredivisie.

One of the Center Back radars that struck my eye was that of Julian Chabot, of FC Groningen. His data shows that he’s very dominant in the air, has a decent amount of Tackles and Interceptions, and, for a Center Back, gets past his marker with a dribble quite often. The German’s passing accuracy, however, is the lowest of all Center Backs in the Eredivisie. It’s probably due to his high amount of long passes. With these long balls, he reaches the final third relatively often. He doesn’t seem to concern himself with building up from the back, he tries to reach the strikers with long balls right away.

Next up is Max Clark, Vitesse’s left-back. He also shows high amounts of tackles and interceptions, relative to the amount of possession Vitesse has, and is not shy of a physical duel. More impressively, he is in the top 5% of completed crosses and has high amounts of passes to the penalty area. He’s been valuable at both ends of the pitch. His passing accuracy has been relatively low, probably due to the higher difficulty of his passes. Passes into the box are harder to complete than passes back to your Center Back.

With midfielders we mean midfielders who are not explicitly referred to as attacking midfielders. So you’ve got your defensive midfielders and 8’s in this category. One of the more interesting profiles comes from Feyenoord’s returned prodigal son, Jordy Clasie. He’s been racking up the tackles and interceptions, while mostly staying away from the physical duels. His low amount of aerial wins can probably be credited to his lower-than-average height. He is playing a lot of passes, most of them accurately, and also towards the final third and sometimes even into the penalty area. However, he has not been able to translate those passes into valuable chances for his teammates, as can be seen from his low amount of expected assists. Clasie also doesn’t really dribble, he just passes.

Although they sound like different positions, they actually have a lot in common. They both need to create for their teammates, but also have end-product themselves. Also, they’re expected to help the team out of possession, by pressing aggressively or staying in a zonal block, trying to intercept through balls. Hakim Ziyech is probably one of the most in-demand players in the Eredivisie, with some of Europe’s top clubs reportedly chasing him. If you look at his radar it’s not hard to see why. All-round very good stats, except for his average shot quality, something he’s getting criticized a lot for.

Robin van Persie’s radar shows exactly what you’d expect. Elite attacking output, but an absolute lack of defensive activity. Quite possibly he is saving his energy during defense to be as valuable as possible in attack for Feyenoord.

As you can see, radar charts can be a powerful tool in evaluating and comparing players. However, statistics should not be the only thing you use to evaluate players. Because these statistics are only related to on-ball actions, and players only have the ball for around 2 to 5% of the total playing time, video analysis will always be necessary to fully evaluate the player. Combining the two will lead to better, more informed decision-making. Stay tuned for more radar charts from Your Tactical Analyst.